2020-Mar-17 by studentinternship15@gmail.com    big data project titles, latest ieee hadoop projects, Best Final Year Project Centers In Chennai, Best Final Year Project Centers In Chennai, Python Project Centers in Chennai, Bigdata Projects in Chennai, Bigdata Project Centers in Chennai   No Comment
Abstract:
Fakes are almost every country s problem, but India has been playing very seriously and has become a very acute problem. Therefore, it is more and more important to distinguish between counterfeit banknotes and authenticity by automatic machines. Automatic banknote recognition systems can be a very good utility in the banking system and other business areas. Paper currency identification with good accuracy and high processing speed is very important for the banking system. The proposed system describes a method for validating Indian currency notes. The currency will be validated by using image processing techniques. 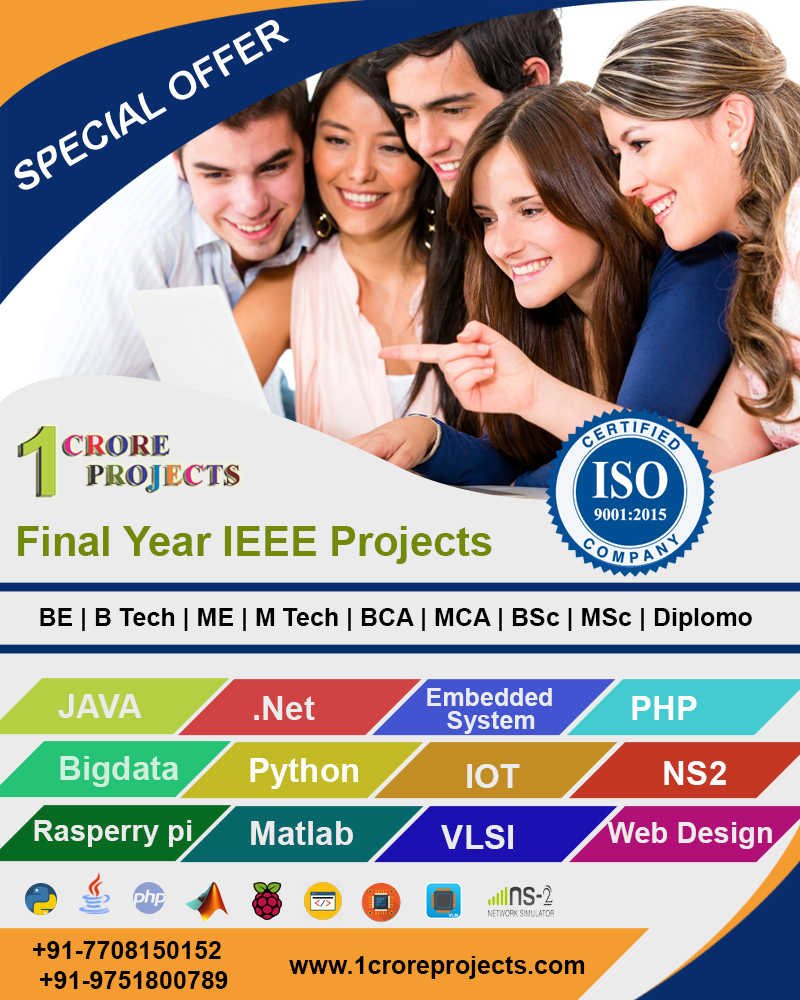 Existing work:
Automated paper currency recognition system can be a very good utility in banking systems and other fields of commerce. Since many years of counterfeiting of paper currency challenges the financial system of every country in different sectors, India is also one of them. In this article, recognition of paper currency with the help of digital image processing techniques is described. Three characteristics of Indian paper currency is selected for counterfeit detection included identification mark, security thread and watermark. The characteristics extraction is performed on the image of the currency and it is compared with the characteristics of the genuine currency. The Sobel operator with gradient magnitude is used for characteristic extraction. Paper currency recognition with good accuracy and high processing speed has great importance for the banking system. The proposed method has advantages of simplicity and high speed. The experimental results show that this approach is effective and efficient and clearly meets the system requirements.
Disadvantages:
•Low Accuracy.
•Do not clearly detect the fake currency
•Low Psnr Value
Proposed work:
The system will work on two images, one is the original image of the paper currency and the other is the test image on which verification is to be performed. The proposed algorithm for the discussed paper currency verification system is presented as follows
A. Image of paper currency will be acquired by a simple scanner in .jpg extension.
B. The image processing will be implemented on this image.
C. The various characteristics of the paper currency will be cropped and segmented.
D. After segmentation, the characteristics of the paper currency will be extracted.
E. The extracted characteristic of the test image then undergoes classification.
F. On the basis of classification, the result is generated.
In the proposed method characteristics of paper, currencies are employed that are used by people for differentiating different banknote denominations. Basically, at first instance, people may not pay attention to the details and exact characteristics of banknotes for their recognition, rather they consider the common characteristics of banknotes such as the size, the background color (the basic color), and texture present on the banknotes. So we are implementing some different way or typical features of currency detection.
Advantages:
•Accurately detect Fake currency.
•High PSNR value
•High Accuracy
Algorithm:
Median filter
Active contour Segmentation
GLCM (Gray Level cooccurrence matrix)
SVM Classification
CHAPTER 3
SYSTEM REQUIREMENTS:
2.1 GENERAL:
The system requirement of the project is described and the specification of the software and hardware requirements of the project is described.
2.2 HARDWARE REQUIREMENTS
Processor Type  : Pentium -IV
Speed                 : 2.4 GHZ
Ram                    : 128 MB RAM
Hard disk             : 20 GB HD
2.3 SOFTWARE REQUIREMENTS
Operating System                        : Windows 7
Software Programming Package   : Matlab R2014b
Tags :  big data project titles, latest ieee hadoop projects, Best Final Year Project Centers In Chennai, Best Final Year Project Centers In Chennai, Python Project Centers in Chennai, Bigdata Projects in Chennai, Bigdata Project Centers in Chennai.
Share on

FILL IT TO GET PROJECTS